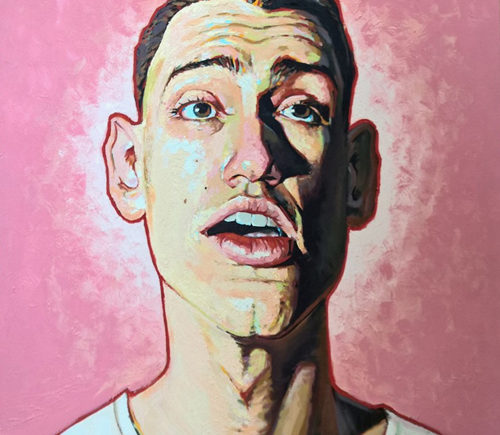 Just outside my bedroom window is a rugged Blackjack Oak.  She isn’t fancy or flashy; neither is she demanding.  She takes care of herself and has a pioneering look about her.

When my parents moved to this property in 2006, most of the native trees were cleared from the areas where they would be living, being replaced with more pleasing fruit trees, crapemyrtles, and one Bradford pear.  Along with a few other trees, they did leave one small oak tree.  That tree offered a shaded spot to sit and enjoy the property, while being a fairly compact plant.  It has not stayed that way.

I moved into this place in 2015.  At that time, the once diminutive oak had become a little more of a presence.  The branches had arched and reached the house, occasionally scraping against the siding.  Ultimately it needed to be trimmed a little, but it’s increased size had created even more of a shaded area, some of its lower branches now no longer putting on leaves.  She had started looking a little bit raggedy.  It made me wonder about how long lived blackjack oaks are, worrying that she had only a limited time left and that I would need to think about  what to do when a replacement or removal was needed.

Blackjack oaks are a type of red oak common from New Jersey to Eastern Kansas and as far south as Georgia and Central Texas.  They are small and hardy trees, happily growing is poor soils and dry areas.  They don’t represent the prettiest of trees, consisting of crooked and twisted branches, many of which stop putting on leaves when those above them block the light.  It gives them a distinctive half-dead appearance that my oak now suffers from, but it does not indicate any sort of problem with the tree itself.  It does have a tendency to droop the leafless branches, making it hard to walk under and requiring annual pruning, but it’s a manageable problem.

These trees are slower growing, but longer lived oaks, especially the western subspecies in Northern Texas, Oklahoma, and Kansas.  These individuals make up a significant percentage of The Cross Timbers, the oak savannah that bisects Oklahoma, separating the heavily wooded East from the arid West.  It’s a forest made up of post oaks, blackjack oaks, and eastern redcedars.  Blackjack oaks can live for more than 200 years, averaging about 80 years.  My fears of needing to replace my tree are unfounded.

No, this isn’t the world’s most beautiful tree.  It’s leaves even feel like they haven’t fully formed, as if they can quite figure out how to evolve into something clear.  The acorns are tiny, barely worth talking about.  The limbs are crooked and bare, at least the lower ones.  They don’t have the lush growth of most of the other trees that surround the house.  However, the tree is home to many birds and those tiny acorns are enjoyed by squirrels and even brazen deer who venture up to the house to graze on them along with the crabapples that grow next to the oak.  And it provides much of my house with shade, having expanded from a shady spot in the center of the yard to a defining feature of the property.

This tree has its issues, but I love her and I’m glad she’s here.