I chose a small school to attend. I grew up in a college town, immersed in the culture of one of the two major schools in the state, but to attend would mean to live at home. I felt ready to be on my own, even if not financially. Rogers State University was only an hour and a half from home, far enough to be away, but close enough to visit at any time. Perfect. Over the few months we had been there, I was starting to really enjoy life away from home. I was only 18.

1998 had just started. I had finished my first year of college and was unsure of where it was all going. I spent much of my time on campus, eating veggie burgers and reading or writing in the small student union. If I wasn’t there, I was in class or working at the on campus daycare.

My favorite new class was Creative Writing I. And my new favorite people were James & Jerry. Both frightened me so much that I could hardly talk to them. James was attractive and brilliant. I could tell he was destined for great things. I had a huge crush. Jerry was slightly older than me and seemed almost lost. He was also attractive and I could tell he and I shared a secret. Eventually, I started talking to him and we were fast friends. We’d hang out daily.

Along with Jerry, that was the year I met my muse, Frank O’Hara. Jerry and I were in the same program at the college. Therefore, we had several of the same classes. American Literature was one of them. We had been assigned a project. I don’t really remember the point of the project, but I do know that Jerry & I decided to video them instead of delivering them live in class. This allowed for us to do more with them. It actually would turn into a disaster. Part of the project was to choose a poem. I found one I liked by a poet I had never heard of. The poet was Frank O’Hara. 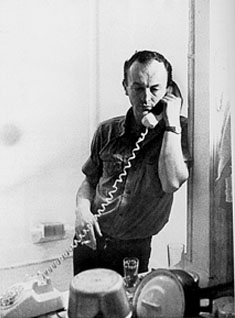 I had fallen in love with the style of the poem. It seemed to really speak to me and I quickly became a fan. I researched everything I could about this new person in my life. I felt oddly connected to him and reading his words felt so familiar. I knew that we were meant to know one another, even if it would be posthumously, as O’Hara had died in 1966. It was much later that I realized that this new muse was gay. It all made even more sense. I had found someone to look up to, a writer to model myself after, and I shared so much with him.

Later, I became convinced that I had an even stronger connection to this man. Perhaps I really do. It seems nearly impossible for me to not have been someone who knew Frank O’Hara when he was alive. I could have been him, an admirer, a friend, a lover, a parent, or sibling. Perhaps, I was a coworker who always looked up to him, but something about the connection is far too real to me. Or it could have happened in the opposite direction. Maybe he is around me somehow. Maybe a friend of mine today is him. Or maybe, just maybe, this is all silliness meant to explain why I am so obsessed with a person I could never have known.

There is no way to know and I continue to be a devoted fan.

I dreamt I was Frank O’Hara.
I softly kissed Larry Rivers on the forehead
and it was again Rachmaninoff’s birthday.

I took a walk along the familiar path
where I once stopped to type something up,
a poem perhaps or maybe just a note for you.

I detoured down to the apartment where we all lived,
that foul address. God, we were happy when we left!
I remembered a story Joe told and how it made me smile
through the haze of the lumped-together smoke.

I made my way back from lunch to the museum.
Mike had made a cake because they had all forgotten me,
but the cake was no good because Mike is not a baker.

And then I woke up. And I remembered having
been him, but not having been him. Imagine!

Frank O’Hara believed his birthday to be June 27. His parents had chosen that day to conceal premarital indescretion. Actually, he was born March 27, 1926.

St Francis
for my muse

Your mother was wrong —
the pin was not so
tacky and I can
feel the pain of
disappointment in my stomach.
You believed today was
was your birthday — your
mother was wrong again
(not to tell the truth) —
to believe that she could
hide her own uncontrolled
desires. I think that you
must have known — have
realized at some point
Be free of the lie — love the
day, the day. Join me
in March for a party.

Eventually, I will include a small history about Frank O’Hara, but for now, I will leave you with my account of discovery and obsession with this important figure (to me at least) in American Literature.

As I look into the face of a man
33 years postmortem, enough time for Jesus
Time enough to realize — to gain beliefs.
He isn’t watching over

he is part of me. I can
feel it in the way his eyes were blue and in
the way he was Irish — not fully, but enough.
O’Hara — O’Hara — O’Hara.

I praise him leaning
on a door or a wall. I praise him wired with
energy… too much energy.

He made me an insomniac.
He got away with it. If I make dots on
the paper — salty wet dots, it’s realization,
it’s discovery! it’s wow! And maybe I should
go to a movie, buy some flowers and a new
typewriter — to peck away at in my own way.
I long for lunch poetry and Joe LaSueur.

Come Frank, I am waiting.

Your words have become a part of me. Everything you meant to be, I try to be too. I am your faithful disciple, your devoted fan, and your dilettante. My words exist because of you, as I try to copy your style and attempt to become you through the craft of putting words on paper. I appreciate that you existed. I am thankful that you came before me to show me the path.

Oh, wait… don’t call you that. That’s right. I hope you know what an influence you had on me. You gave me the confidence to be myself and seemed to genuinely believe in me as a writer and as a friend. Not many were as supportive at that point in my life and I am grateful that you were.

I’ve always felt like I am in the shadow of your greatness, even now, having spent so many years not even speaking to you. The things you write about and the style in which you do it is inspiring and I appreciate having such amazing talent to look up to. Someday, I hope we can share the stories of our successes with one another again in person. I miss having you around daily. And I would love to revisit a shared piece, having gained much more life experience since the original one-act deal we wrote.

Thank you for being you and helping me be me,
Brian